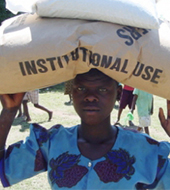 The donations given to this fund are going to parts of Malawi, Mozambique, and Zimbabwe.

Cyclone Idai has brought devastation to parts of Malawi, Mozambique, and Zimbabwe, and SIM offices in these countries, together with partner agencies are being mobilized to help survivors.

More than 300 people are confirmed dead in Mozambique and Zimbabwe but those totals are expected to rise as relief workers battle to reach the most hard-hit regions.

The United Nations has described the cyclone as a ‘massive disaster’ and estimates 1.7 million people were in its path.

In Malawi, SIM is working with church and para-church partners will begin by providing aid in the form of food parcels in the Chikhwawa district.

“Whilst we need to look at the immediate future, there is a longer-term problem, as it is expected that much of the maize crop in the south of the country, which was soon due to be harvested, will have been destroyed or severely damaged,” said Mike Hammond, Country Director or Malawi. “This will bring a potentially greater problem later in the year but for now we are looking to help people in their immediate need.”